Photo: Pixabay / Pexels
Many folks looking for vacation log homes have fond memories of week-long stays in Western lodges with enormous great rooms and fireplaces, of dinnertime at Scout camp spent at picnic tables beneath an expansive overhang of massive logs, or the dusky windows and rooflines of a tucked-away hotel partially hidden in the pines.

This architectural trend, informally called “Parkitecture,” was developed a century ago as railroads spread west and takes its design cue from the shelters at national parks such as Yosemite, Yellowstone, or Zion, as well as from the Great Camps in the East.


“The railroads began the first major concession developments in national park areas,” says Laura Soullière Harrison, author of Architecture in the Parks. “The railroads, all hoping to increase passenger traffic on their main lines, provided adequately comfortable lodgings at their park destinations.” The lodgings were developed by the era’s top-flight architects and builders, who captured the natural bond between architecture and the landscape.

Photo: Jrozwado
Bill Rauer, a Boise, Idaho-based architect, says there are a couple iconic features that define the “Parkitecture” aesthetic. “It generally features large overhangs, log or timber columns with large diameters or dimensions, and many levels of roofs and gables.  The appearance seems to hug the earth giving it a feeling of fortitude and longevity.


Today’s prominent log-home planners cite those classic designs as influences. Ellis Nunn, a Wyoming-based architect, mentions Robert C. Reamer, who designed Old Faithful Inn in Yellowstone National Park, S. L. Bartlett & Thomas D. McMahon, designers of the Glacier National Park Lodge; Kirtland Cutter, designer of Glacier National Park's Lewis Glacier Hotel; and Gilbert Stanley Underwood, designer of the Grand Canyon Lodge and the Ahwahnee in Yosemite National Park.
Today’s buyers are trying to re-create the look by asking log companies to incorporate large-diameter logs, chinking, timber, and grand entries into their rustic-setting homes.  Their desire to live in the mountains and close to nature is being satisfied by land developers who provide roads and services to these remote areas. And for those who are nearing retirement, and can invest in a luxurious vacation home, the nostalgic lodges of the past act as guide to what looks natural, massive and successful in the rough terrain.
See also: A Guide to Today's Log Home Styles

This Book is the Ultimate Guide to the Vast Wor... 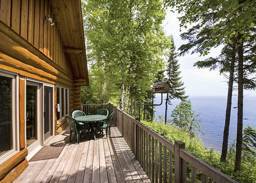 This Grill is a Must-Have for Outdoor Entertaining 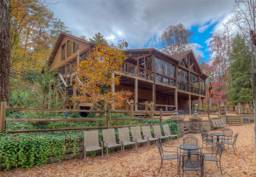