A New Log Home for Land With Family History

A new log home helps a Wisconsin family return to their roots and look forward to their future.

For the Armstrongs, using local materials was a priority. After neighbors had to blast during their build, Christine repurposed the discarded stone into landscaping elements surrounding their 5,200-square-foot half-log home.

Noteworthy details on the home’s exterior include a stamped metal roof, wraparound deck (complete with pergolas, round railings and spindles) and natural split stone.

An eclectic mix of seating gives the living room a casual feel that’s right at home alongside the reclaimed wood elements. The rough-hewn floors originated from boards taken from a feed mill in upstate Minnesota.

The mantel above the two-sided fireplace is made from logs burned during the Great Peshtigo Fire of 1871 (which occurred days prior to the Chicago Fire and was even more destructive). “When you’re having a glass of wine with someone visiting your home, you can tell that story. It adds a piece of Wisconsin’s history that can never be replaced,” Ron points out.

An upstairs loft with a cozy armchair, cushioned settee and desk serves as a comfy, light-filled lounging spot away from the bustle of the rest of the house.

With four full-size beds and two twin beds, the upstairs bunk room has plenty of space for hosting overnight guests. A trio of logs, rich with natural character, anchor the custom-made beds and meld with the tongue and groove ceiling and red plaid quilts.

Throughout the home, a skip-trowel finishing glaze gives the walls subtle dimension that pairs perfectly with the walnut stain. “It works with the logs because the finish looks more antique as time goes on,” explains Nate.

A stone backsplash, twig details on the kitchen cabinets and granite countertops with a honed, matte finish lend to the rustic feel of the hard-working kitchen.

In the powder room, a granite boulder turned sink basin is paired with a custom-made vanity. “When you build a house, it’s these sort of details that really make a difference,” says Ron.

Soft-to-the-touch fabrics in a soothing palette of creams and blues turn the master bedroom into a restful retreat.

There’s no shortage of eye-catching details in the basement game room, including the cedar log posts with their knots, burls and root flares; a bowling-alley-turned-game room-table; an oversized magnetic scrabble game; and a custom bar with a hand-hammered copper top. “When you buy it already hammered, it’s too uniform,” explains Ron.

A hot tub plus plenty of outdoor seating for lounging and dining promise hours of R&R.

For the Armstrongs, using local materials was a priority. After neighbors had to blast during their build, Christine repurposed the discarded stone into landscaping elements surrounding their 5,200-square-foot half-log home.

For years, Nick and Christine Armstrong’s favorite family getaway was camping with their four daughters along the rural High Falls Flowage, a manmade lake off of the Peshtigo River in northeast Wisconsin. Surrounded by nothing but relaxation, they indulged in all the usual camping festivities — days filled with swimming, boating and fishing on the crystalline waters, and evenings spent gathered ’round a crackling campfire.
Two decades later, that idyllic spot is still a family favorite. On any given weekend, you can find the couple and their girls taking part in the same activities that made them fall in love with the area. The only difference? They’ve traded their tent for a luxurious but laid-back 5,000-square-foot log home they’ve dubbed “High Falls Lodge.”

How the couple ended up building a home in the same area where they used to camp is a serendipitous story.

“About 10 years ago, the power company sold lots around the Flowage at auction,” Christine explains. “At the time, purchasing a lot was out of our price range, so we didn’t even think about it.”


But then the magic happened. The land came up for sale again a few years later. This time, the couple was ready. They bought a lot and began making plans to build their dream home. 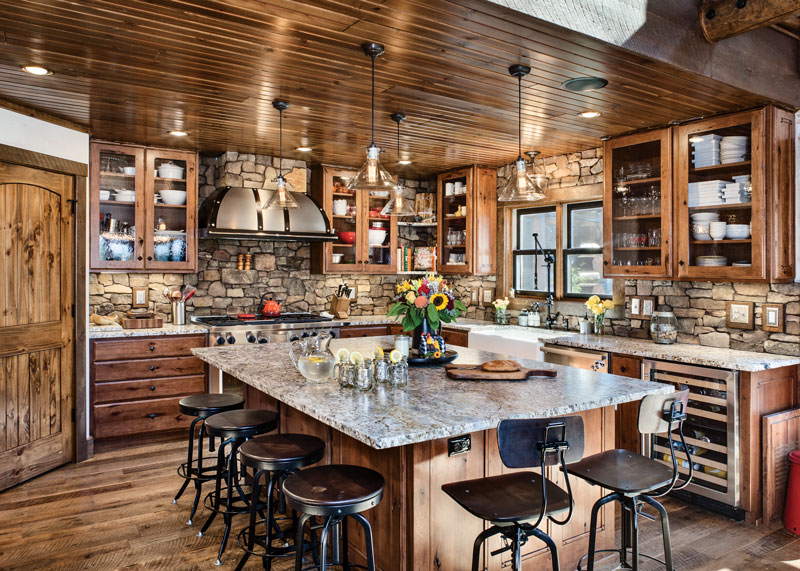 “We started by digging the foundation for an outbuilding, and that’s when we hit pipes,” Christine says. After talking with the locals, the Armstrongs realized they were building their getaway house in the exact spot where they used to camp as a family, and a basic plumbing system, designed to service campers, was already in place. “It was meant to be,” she says.

The design and construction of the house came together in the same auspicious way, with each element — from the logs and stones to the artwork and furnishings — falling into place just as they should. To pull it all together, the Armstrongs enlisted the help of Ron Charon and Ryan Rabida of Expedition Log & Timber Homes.

With Ron’s input, the couple chose a hybrid half-log home, which uses conventional framing sandwiched between split logs on the exterior and interior. They paired the 10-inch-diameter, walnut-stained logs with a healthy dose of drywall and stone accents. “They wanted it to feel like a lodge,” Ron explains. “That meant using the darker stain and opting for things like real stone, not cultured stone.”

In fact, an abundance of natural materials find a home at the Armstrongs’ place. Each individual element was chosen not only for its singular beauty but for how it fit into the bigger picture of the build. “These homes are like a painting,” explains Ron. “As you move through the process, they come to life.” On each level, you’ll find cedar log posts that were pulled from a barn built in the 1870s. With their natural knots, burls and root flares, they command attention. Alongside them, earthy details like a hand-hammered copper bar top, reclaimed wood and pebble flooring, and natural split stone look right at home.


Christine adds: “There’s a good story about the stone. To save on shipping, I ordered much more than I needed, so we had enough to cover the fireplace on the screened-in porch, the backsplash in the kitchen, the exposed basement wall and the area around the firepit. When you’re building, you don’t always know how you are going to use something, but if you have a feeling, go for it.” 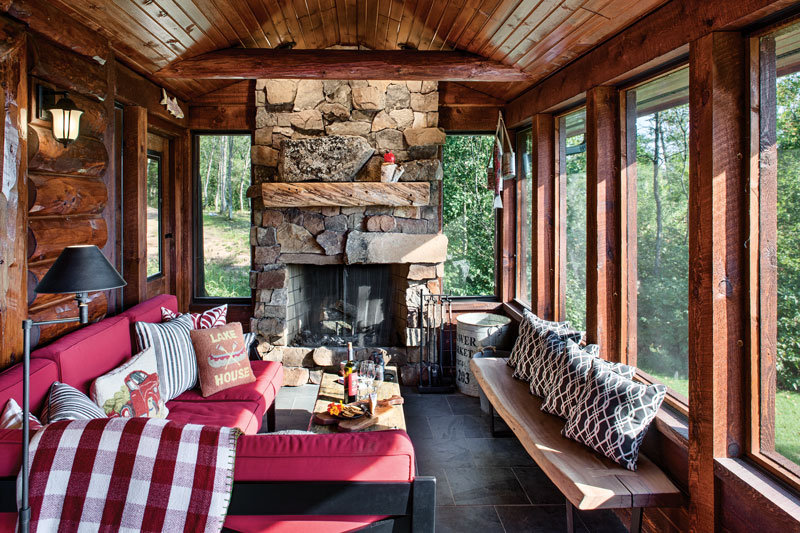 From the purchase of the property to their interior selections, going with their gut hasn’t steered the family wrong yet. For the decor, Christine, an interior designer by trade, filled the home with a mix of Restoration Hardware, Pottery Barn and local finds that feel anything but fussy, thanks to their careful curation. “It’s kind of a cross between rustic, modern and industrial,” she says. “Things here have to hold up to lots of people and dogs,” she says. “I’m never running around saying, ‘Don’t spill!’ because that’s not how we live.”

How they do live is carefree — at least once they arrive at the lake house Friday night after a long week of work. “The moment you walk in, you can feel the tension melt away,” Christine says. After a night of deep sleep, the couple wake early and head to the porch with steaming cups of coffee in hand. The land stretching out 200 feet to the river is quiet and still, but not for long.

Soon, the sounds of eggs cracking, bacon sizzling and pans clanging fill the air. The culinary din eventually gives way to happy chatter from the dock as the family spends the afternoon on the water, with plenty of breaks to refuel. “Most of our time is about eating and making cocktails,” laughs Christine. After a full day of fun in the sun, when evening temps start to dip, everyone gathers around the firepit to linger into the wee hours. The next morning, the restful rhythm starts over again.


Having spent practically every weekend at the house since construction was complete, the home is now as much a part of the family’s story as the land it sits on. “We wanted this to be a place that would be a legacy to our children and their families,” explains Christine. “Even three years after building, I still say, ‘I can’t believe this is our house.’” 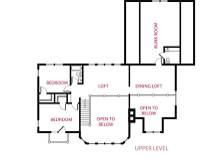 This Ohio Log Home is the Product of a Life-Lon...

Reader Spotlight: An Antique Log Cabin in the A...

Success
Check your inbox for an email
Happy Reading!
‹ › ×
{#